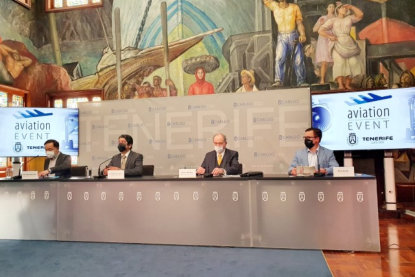 The president of the Cabildo, Pedro Martín, closed on Monday the intense day of work in which the board of directors of the meeting on connectivity and tourism (taking place the 11th of June) determined the content of the presentations to be given by 200 experts from airlines, tour operators and the media, all related to connectivity.

The President of the Cabildo of Tenerife, Pedro Martín, announced on Monday night that Aviation-Event will make Tenerife the centre of the debate on the tourism industry next June. He did so after a day of intense work by the meeting’s board of directors, made up of important figures in the fields of aviation, airports and tourism and it sets the agenda for the leading event in Europe on connectivity and tourism communications.

The Aviation-Event board meeting, presented in the morning, concluded that „the island will show its fiscal, economic and geographical benefits to more than 200 attendees through its Why Tenerife consultancy programme“.

During the presentation of the conclusions of the day, it was determined that, in addition to the business opportunities offered by the island, the future business of the tourism industry will be addressed after the pandemic, as well as the digitalisation, the opportunities that are opening up for the sustainable travel industry and the characteristics of the new leadership in the tourism industry.

„The return of the tourism activity and the start of the summer season brings the opportunity for the island to be at the epicentre of the decision making process. The Aviation Event will be a success for the island and it will help the sector to take off again, after several months of the vaccine rollout“, explained José Gregorio Martín Plata, the island councillor for Territorial Planning, Historical Heritage and Tourism.

The topics to be addressed at Tenerife Aviation-Event 2021 were presented by the President of Aviation Event, Adrian von Dörnberg, and the CEO of Tenerife Tourism, David Pérez, to members of the Aviation Event’s own board of directors, Pedro Martín and José Gregorio Martín Plata, the island’s vice-president, Enrique Arriaga, the delegate councillor for External Action, Liskel Álvarez, and the island’s director of mobility, José Alberto León, including a large representation of mayors and councillors from the island’s tourist municipalities. 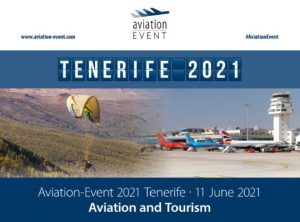