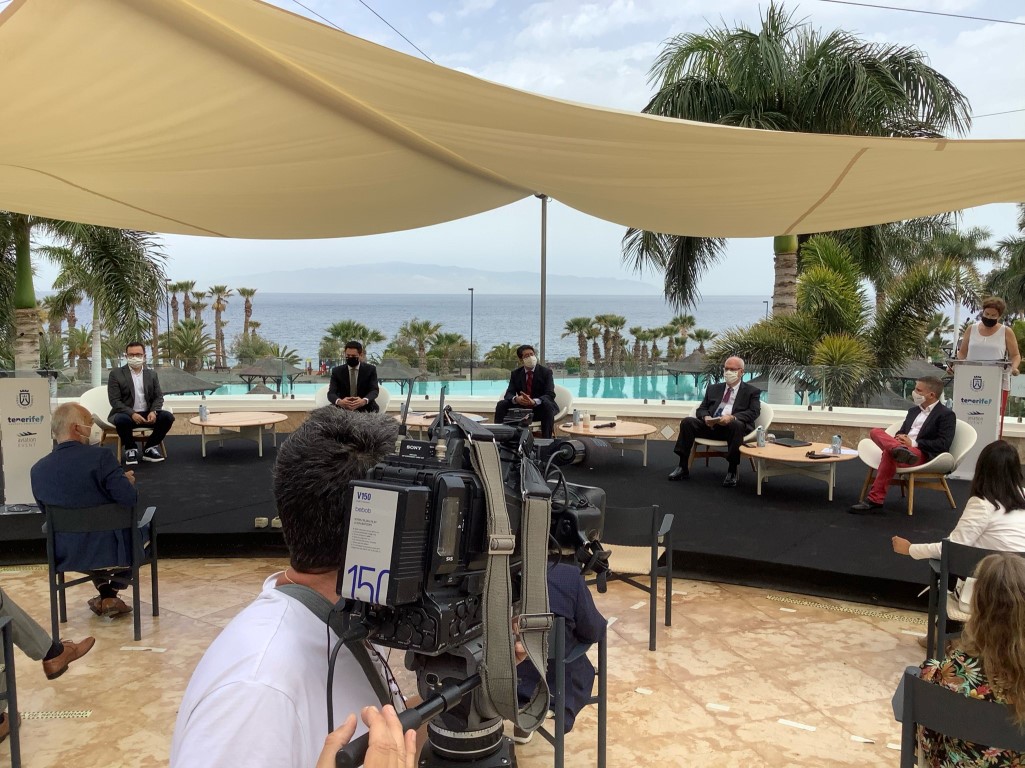 The President of the Island Council of Tenerife, Pedro Martín, presented the international congress this morning, which 150 experts from the aviation and tourism sector will attend in person, which will be held in the south of the island on Friday

Henrik Hololei, Director-General for Mobility and Transport of the European Commission; Juan Fernando López Aguilar, President of the Civil Liberties, Justice and Home Affairs Committee of the European Parliament, and Raimonds Gruntins, Director of Regional Affairs of the  IATA, are among those attending

The President of the Island Council of Tenerife, Pedro Martín, stressed today that the Aviation-Event 2021, which will be held on Friday, 11 June at the Gran Hotel Meliá Palacio in Isora, will place the island at the centre of the resumption of tourism activity and aviation, with the attendance in person of 150 people related to the field of air connectivity and the tourism sector from around the world. In addition, it will make the island a European reference point for communication in this field.

Pedro Martín highlighted that “the fact that this convention is held in Tenerife has not happened by chance: it is the result of a year’s work, and will serve as a forum for debate on the future of air communications”; adding that this forum will discuss “what will happen after a one-year shutdown, which we have particularly felt here in Tenerife due to our dependence on tourism”.

The President of the Island Council stressed that the Island Council of Tenerife “must commit to the Aviation-Event and to the future of this sector, where digitalisation and sustainability will be continuously present henceforth, both in general, and in the strategy of our destination, in particular”. Similarly, this will be the backdrop for the debate on “the new regulation of the green passport”. “I am pleased that we have had the chance to open up this debate that society needs a response to and we are convinced that this is the right forum to do so”, he stressed.

The presentation of Aviation-Event, which is being held for the first time outside of the usual circuit of European capitals, took place this morning at the same hotel that will host the event, which also included the participation of the CEO of Turismo de Tenerife, David Pérez, along with the CEO of Aviation Event, Marcel Riwalsky, the owner of the German airline consultancy firm Bluearbre, Peter Baumgartner, and the CEO of SomonAir, Thomas Hallan.

The CEO of Turismo de Tenerife, David Pérez, explained that this forum, which “began to take shape in Frankfurt a year ago, seeks to address the future of commercial aviation and its relationship with tourism. But it also offers a second opportunity: the business of attracting people to the island, through the local establishment of companies, as the airline Vueling has done, thanks to such tax breaks as exist in the Canary Islands Special Zone (ZEC) and those that “Why Tenerife?” advises on – a platform that the Island Council forms part of through Turismo de Tenerife and the delegated foreign action department of the Tenerife institution.

The CEO of Aviation Event, Marcel Riwalsky, highlighted that “this is the first in situ congress, without videoconferences, that we can enjoy “live”, without virtual platforms, since the start of the pandemic”. Riwalsky thanked the President of the Island Council and the CEO of Turismo de Tenerife for their “commitment to this venture, which began in mid-pandemic when we did not know how we could fly and there was not even a vaccine for the coronavirus”. For that reason, and thanks to the commitment of the Island Council and of Turismo de Tenerife to host this congress, “we have decided to award them the Aviation-Event Media Award”, he added.

Riwalsky added that “this will also be the first time that the aviation sector and tourism unite”. “The aviation industry has always acted on its own in the past. Now is the time to join forces and continue with this joint work which henceforth, and thanks to this event to resume tourism and aviation activity, may continue to be developed at similar meetings in the future”, he specified.

For his part, Thomas Hallan, CEO of SomonAir – one of the largest airlines in the world, with headquarters in the Asian country of Tajikistan, stressed the importance and interest of such an event as that which will be held in Tenerife. “It will be very interesting to share the moment at which the revitalisation of the aviation industry will take place, and do so with so many people involved in the sector; more so, taking into account that sustainability will be one of the issues to be addressed at one of the Aviation-Event panels”, he announced.

The CEO of the German airline consultancy firm Bluearbre, Peter Baumgartner, stressed that “the holding of Aviation-Event is a milestone for the immediate future, thanks to which the planet will begin to adapt to the current situation of the pandemic”. And he alluded to the proposal, in the panels that will take place on Friday, for “the potential scenarios that we may face: to cater for post-Covid life”. Baumgartner added that “the Aviation-Event will make it possible for Tenerife to place itself at the very epicentre of post-Covid life”.

The origin of Aviation-Event Tenerife 2021

The event, which began to take shape in June 2020, and which was firmed up in March this year during the visit by the Supervisory Council of Aviation-Event to Tenerife, will include the participation of senior representatives from the aviation industry and institutions from throughout the continent of Europe, along with others from America and Asia: ranging from airlines and airports to leading organisations and political leaders, who, during the different debates that will take place throughout the day, will analyse the keys that will allow the foundations to be laid for the new era beginning in the tourism and aviation industries.

Agenda of the event

At 9:30 am on Friday, 11 June, the President of the Island Council, Pedro Martín, will inaugurate the event, which will also be attended by the Chairman of the Supervisory Council of the Aviation-Event, Adrian von Dörnberg, and the CEO of this organisation, Marcel Riwalsky. The leading figures that will take part in the congress include Henrik Hololei, Director-General for Mobility and Transport of the European Commission and Juan Fernando López Aguilar, President of the Civil Liberties, Justice and Home Affairs Committee of the European Parliament. Representatives of more than 20 airlines and cruise ship companies will also take part, along with senior figures from the International Air Transport Association (IATA).

The panels for debate and speeches into which Aviation-Event Tenerife 2021 will be divided will address such aspects as the opportunities the island offers to set up businesses; the keys to the resumption of activity in the European aviation sector; the vaccination certificate that the European Union seeks to introduce to facilitate traveller mobility; the handling of the crisis caused by the pandemic and how the tourism sector should address this, and the scenario that will open up under the so-called “new normal”. The recovery of aviation on other continents, such as America, digitalisation as a driver of new business models in the sector and the opportunities for a more sustainable travel industry are among the other aspects that will also be addressed at the congress.